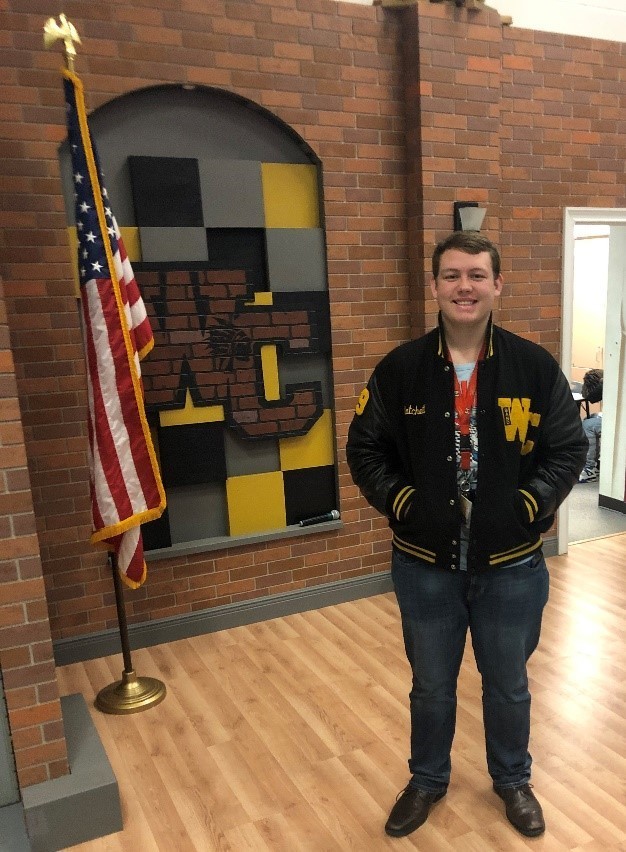 The WCTV studio is one of the most attractive, professional studios of any high school in the country. Recently, it just got better.  Thanks to the leadership of Senior Andrew Matchett, WCTV has an attractive new wood laminate floor in the TV studio.

Over the past three years, Andrew has participated in the Video Production program at Walker Career Center, and he has been an active member of the WCTV crew.  Andrew stated that the flooring in the studio his freshman year became warped and had to be removed.  He went on to say that with the upgrade to the control room this year, it was a good time to cover the painted concrete so upcoming students could enjoy it. Andrew thinks the basketball floor is a good look and has a cleaner appearance.  The school agrees!

But the installation of a new floor also helped Andrew fulfill another goal— completing his community project in route to becoming an Eagle Scout.  Over the past 12 years, Andrew said that he has gone through the Scouting program with his dad and one of his best friends.  Now that he is coming to an end of scouting, Andrew fondly reflected that the greatest part of his experiences is all the time he was able to spend with his dad.

After graduation, Andrew will be attending Indiana University majoring in broadcasting.  Andrew says that he would eventually like to be a sportscaster for a local news station or Big 10 Network.

Walker Career Center appreciates the beautiful new floor in the studio, but more importantly, the personal and professional contributions Andrew has made to represent WCTV!